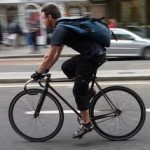 It is great having cyclists and cars and buses all having their own lanes and sharing the road as the population grows, and our transport needs change.

However are we adding cycle lanes – and they are springing up all over Massey for people who travel to work or for recreational cyclists? General observation is that not many cyclists crowd the roads to travel to work, however many cyclists take up room on the roads in the weekends as they travel often in packs!

Is the cyclist paying anything towards the cost of the cycle lanes that are being created for them and do they use them?  General observation is that they don’t when you watch them racing down Triangle Road and crossing the bridge  near the totem poles. At that point the cycle lane seems to disappear.

Cyclists are required to obey the law. Do they? For example how many run a red light or become a pedestrian when it is convenient. Do the Police give them tickets if they do not indicate that they are changing lanes for example?

To hear of the death of a cyclist at the start of state highway 16 in Parnell is sad. Knocked over by a truck  that had the green light in favour of the truck. So should we build off road bike lanes for safety sake, and who pays?

When I rode a bike to school you had a bell on the bike, you sat up straight, you needed a front white light and one red at the back, if you rode at night. You had to stop at traffic lights like a car and use hand signals. I can remember a traffic officer telling a friend of mine off for riding on a footpath although one should add I believe it would be safer for cyclists to share the footpath with a pedestrian than the road with trucks  – Don’t hear of that now days of cyclists being told off for riding on a footpath.

If we (I was a student at Rutherford High School) rode over  the Te Atatu bridge to school instead of walking our bike through the underpass/walk way under the motorway, we  would be told off by prefects and disciplined by school staff at Rutherford. In other words safety was in our hands – it was our attitude as a cyclist to take responsibility for our safety. It was unsafe riding over the bridge. You only did that when you were running late for school of course.

So should bikes  be registered to help pay for the cycle lanes that are taking over car lanes. And should the cyclist  be given a ticket if they do not use the cycle lane, if one is available to use.

What do you think – check out our poll