The following article appeared in the NZ Hearld in 2012 –  Below the NZ Herald article is short piece about Jack Riddell  who lived in Te Atatu South for 49 years and was active in the West Auckland Community through Rotary and his business.

The 24 Battalion Association may be officially disbanding next weekend but the remaining members know that the close relationships forged at war will never end. Yvonne Tahana writes

It was the rhythmic sound of horses’ hooves that tipped Jack Riddell off to the shifting position of enemies at the battle for the Senio River.

Inland from Florence, between the Adriatic Sea and the Apennines, Senio broke the back of the Germans in Italy. In the previous year they’d been progressively moved north but clearing the enemy from the river wasn’
t an easy matter.

For three months in 1945, 24 Battalion had to wait out a winter to get across the narrow nine-metre waterway, which was so deep that at its centre it couldn’t be forded. Polish soldiers were part of the ground force, as were other sections of the Second New Zealand Division that faced enemy soldiers who had fortified machine gun positions on stopbanks.

The wartime record makes the point that even if the southern bank was captured, the Germans could still concentrate fire from close range from the other bank.

Near Cotignola on April 3, the battalion’s A and B companies attacked a 90m section of the river. The Official History of New Zealand in the Second World War 1939-45 explains the difficulty of capturing the southern side.

“A duel at close quarters ensued, in which each of our companies tossed more than a thousand grenades over the bank within a space of 24 hours,” historian Randal Burdon wrote.

Liquid napalm and grenades, which were packed into a bag to stop them rolling harmlessly into the water, finally cleared the southern bank. Allied airforces, using 800 planes, bombed north of the river, allowing 24 Battalion to push forward.

On April 9, Riddell, then a 24-year-old B company corporal, had taken up position on a roadside close to a stone home. He’d moved there because he’d heard a horse moving down the road and knew that was how German soldiers had been supplied food and ammunitions. He’d heard the sound on endless nights across the river. “Clippity clop, clippity clop, clippity clop.”

Seven decades on, Riddell is sketching out road formations at the table of his Te Atatu home.

He points out his position, where the horse fell after he’d opened fire and marks where it blocked the road. It was carrying a six-inch Howitzer, a type of heavy fieldgun.

Enemy soldiers took cover on the opposite side of the raised road.

“The horse was blocking the road, the Germans then lined up across the road, seven of them. But our fire was so intense. I called out and my call was answered.

“The officer in charge surrendered. His gun was on the ground in front of him – he bent down to pick it up and I kicked it away.”

He knows many Germans died during the war but that no one died in the small exchange is something that matters to him, all these years later.

“We took seven prisoners, we lined them up, searched them. The officer guy, he tapped me on the shoulder and he pointed to his leg. Ended up he had a knife in his sock.”

Riddell won the Military Medal for that action and his part in capturing an artillery wireless operator four days later.

They’re encounters that have to be coaxed from the 91-year-old because, like other World War II veterans, it’s not something he likes talking about. The war he says, wasn’t about individual effort, it was about a collective effort.

Riddell is far more comfortable talking about the wider history of the 24 Battalion, which saw action in Greece, North Africa and Italy.

Established in 1940 it drew its members mainly from Auckland but recruits came from Waikato, Bay of Plenty and Taranaki. During the following five years 3500 men served in Greece, North Africa and Italy. Casualties were high: 522 were killed and 1600 were wounded. Those statistics mean nearly everyone took a shot, Riddell jokes.

Age is catching up with the 120 members who are still alive and they’ve decided to wind up their 24 Battalion Association. The youngest members are in their late 80s. Second generation members, the sons and daughters of original members can’t be expected to run the organisation’s business.

Next weekend, on Saturday evening, a military Beat Retreat will sound the association’s end. The musical honour will be followed by a memorial service on Sunday.

The association was set up in 1947, when a popular officer, Major Sam Lea, died in a road accident. The association’s president, Murray Adlington, says that a man who could survive the greatest conflict the world had ever witnessed and then die just two short years later in a comparatively banal way at home gave the young men pause.

They didn’t want to drift slowly away from the mates they’d made in Europe and North Africa.

Adlington joined the Italian campaign after Cassino, where Allied forces had taken staggering losses of life. Now 89, he said he had worried about how he’d be received as a reinforcement.

“I joined with trepidation that I was late. But I had a wonderful reception. The senior officers welcomed me and said how pleased they were that I was there. That warmth from the old hands, it’s something that I’ll carry with me for the rest of my life.”

Both veterans say it is right that at Anzac Day New Zealanders remember those who did not return and the service of all soldiers. Important too, and maybe a little overlooked, is that many of the men who came back built their lives: they raised families, became business owners, judges and MPs, they played sport, got involved in their communities. They lived.

Adlington says some struggled with the readjustment to post-war life, and were overwhelmed by the memories of war. “If you carry the sad parts of life with you, you’d go under. You just hoped it didn’t happen to you. [Soldiers] had their civilian lives to get on with and they did it in the majority of cases.”

Over the decades the association worked hard to look out for the welfare of its members. Initially, there were visits to hospitals and convalescent homes, later there were education scholarships and a holiday retreat was built at Whangaparaoa for soldiers’ families.

An annual reunion at Queen’s Birthday Weekend was instituted, and trips around the North Island were common. Wives were excluded in the early years but were included once their husbands realised it wasn’t half as fun without them, Adlington says.

Working bees were called for manual work, like putting in a concrete driveway for a mate. Photos tell the story of the other simple ways the association helped each other. Riddell points to one middle-aged man, cigarette hanging out of his mouth. Eric Hunter, he says, was a “rough diamond” who mowed a war amputee’s lawns for years.

It’s the right time for the association to wind up, Adlington believes, but the friendships forged in extreme circumstances won’t die, he smiles.

“All these years it’s been a renewal of the comradeship of our war years. It’s become an extended family, we’ve shared our joys and our sorrows. I couldn’t have asked for closer friends.”

The public are invited to attend the Beat Retreat, a Memorial Service and the Illuminate film projections at Auckland War Memorial Museum which will honour the 24 Battalion, their sacrifices and their enduring commitment to their fellow members through the Association. 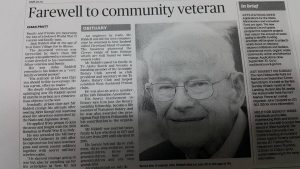 As a young man Jack Riddell was a deeply committed pacifist and spent time in prison and detention during the earlier parts of WW2. There was a gradual realisation that for him pacificm was too absolute and he came to see that ethics were not so black and white as he had thought. He applied to join the army and later in Italy won the Military Medal.

After the war Jack worked as an engineer before opening his business. In this capacity he was a pioneer in the manufacture of stainless steel yacht components in his premises in Partiki Road in West Auckland (Cleveland Matal Pressings). Jack in a book tells of his family life and describes the way in which his change from pacifist to soldier affected his parents and sisters. His account ends with a discussion of the moral basis for his life as he looks back on his experiences and the development of his beliefs. Jack was a member of and past President of the Rotary Club of Te Atatu.