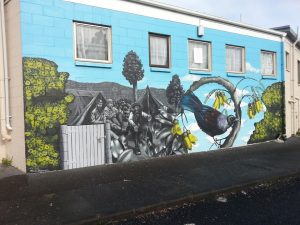 The Massey Birdwood Settlers Association while owning a community hall, is primarily an incorporated society established in April 1925 as a resident and ratepayers group, the primary function being to represent the views of residents and ratepayers to Council and Government and ensure adequate resources are being spent in the area by the governing bodies for the benefit of the whole community.

The hall itself was built in 1956 on the corner of Don Buck and Red Hills Roads on Conservation Department land known as the Massey Birdwood Domain. In 1954 the then Government gazetted a notice providing the Association with the rights to own and manage a community hall on the Domain.

It is always fitting to remind people at this time of the year that Massey is the name of the Prime Minister, William Massey, who served at the time of the first World War and Birdwood is the surname of the man who led the NZ troops off Gallipoli.

The mural on the side of the hall depicts Don Buck (real name Randoff Sanfrisco Figero) who worked with newly released prisoners in the area, trading gum for profit. The mural also shows the environmental views that Massey takes in of the Waitakere Ranges and the trees that line the horizon and the Tui which is a native bird that lives in the trees. The leaves on the trees by the way are hand prints by some of the children who attended Massey Primary at the time mural was painted.