Mayor of Auckland, Len Brown, held a “Mayor in the Chair” meeting at Massey High School, in the performing arts centre, on August 13th.

The Mayor was in attendance primarily to answer questions about rates, most people in the west of Auckland looking at a rate reduction. We should add this Association is looking at a 50% increase in its rates!

The Mayor ended up responding to questions raised by residents residing in Richfield Crescent. As many people know, Westgate Drive is still not open.

In order to undertake development work just off Westgate Drive, trucks and other heavy machinery access the area from Rush Creek.

This leads to narrow residential roads being constantly used by heavy construction vehicles and residents say it is like having rumbles on three sides of their property every day.

Property developer John Long attended the meeting, and along with residents expressed his anger and frustration that has seen Westgate Drive only partially open for over four years.

While the Mayor did not hold jurisdiction during Waitakere City Council days, Auckland Council has had close to two years 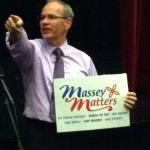 to sort the problem out.

The Local Board is seemingly unable to make headway on behalf of residents with the bureaucrats at Auckland Council and Auckland Transport.

With local residents jumping up and down at the Henderson Massey Local Board’s lack of action, Local Board members Ross Dallow and Warren Flaunty are currently working on the issue.

This is a longstanding problem; the issue was raised at the last meeting of the MBSA executive, with Warren Flaunty in attendance.

The Mayor was hopeful that the matter would be resolved within a few days. The Association, on behalf of local residents and Massey residents hopes so too.