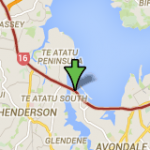 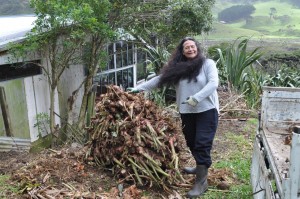 It’s that time of year again when folk get stuck into weeding and get rid of their pest plants in the 14 free weed bins that Keep Waitakere Beautiful Trust have dotted around West Auckland from March 1 to 31.

Supported by the three Western Local Boards, War On Weeds regularly generates over 100 tonnes of green waste each year – the bulk of it invasive weeds like wild ginger, woolly nightshade, jasmine and trasdescantia.

The Massey bin is located Massey Library car park, corner of Westgate Dr and Don Buck Rd. For other bin locations and details of what can and can’t go into the bin visit http://kwb.org.nz/war-on-weeds/ or like our facebook page https://www.facebook.com/KeepWaitakereBeautiful.

In the photo Georgia Harmon from Te Henga has a pile ginger ready to be taken away and is taking advantage of the annual “War on Weeds” to do just that.

Major development across the region is planned for the next few years.  Due to increased levels of immigration and land development (in part spurred on by the establishment of special housing areas – SHA), the population of the North West is predicted to double over the next 30 years from 70,000 to 140,000. Planning for development of Special Housing Areas in Hobsonville Point, Hobsonville, Westgate, Massey and Huapai is already underway. Many North West businesses are currently assessing opportunities for growth to meet the needs of an increased population and changing demographic.
Even if businesses are performing well it is important to keep looking for ways to develop and this event enables businesses on the Network to hear how other businesses intend to respond to the North West growing Market
VENUE: West Harbour Tennis Club, Picasso Reserve, Picasso Drive, West Harbour, Auckland
DATE:    Wednesday March 11th
TIME:    5 – 7.00 pm
Detail:   Presentations by local business owners outlining their plans to meet a growing market (followed by questions from the floor)
SPECIAL NOTE:
How is your business responding to the North West growing market? We are looking for local businesses to present at this event.  For information on presentation requirements please contact:  masseymeansbusiness@gmail.com
Networking Opportunity and Supper to follow
General registrations for the event: masseymeansbusiness@gmail.com

There are a couple of changes ahead for the SH16 Patiki Road citybound exit;

On Wednesday 19th November, 9.30am – 11.30am, the Massey Employment Gateway Programme (MEG) based at Massey Community House is hosting a great little session (which is FREE) called “Dollars and sense”, it’s run by our friends at Waitakere Adult Literacy and is a brilliant addition to any CV.  It’s a refresher on all aspects of Maths for Work, percentages, GST, a few tax calculations and giving change.
Please register your interest with Maxine via text on 021525616 or email maxine@notforprofithr.co.nz.